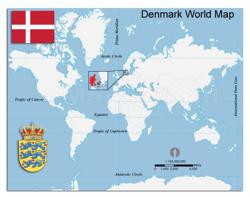 Denmark is a Nordic country in Northern Europe, located southwest of Sweden and south of Norway, and bordered to the south by Germany. The Kingdom of Denmark comprises Denmark and two autonomous constituent countries in the North Atlantic Ocean, the Faroe Islands and Greenland. Denmark proper has an area of 16,639 sq mi (slightly smaller than Indiana) and a population of around 5.64 million inhabitants.  The country consists of a peninsula, Jutland, and the Danish archipelago of 443 named islands, of which around 70 are inhabited. The islands are characterized by flat, arable land and sandy coasts, low elevation and a temperate climate.

A Scandinavian nation, Denmark shares strong cultural and historic ties with its overseas neighbors Sweden and Norway. The national language, Danish, is very closely related and mutually intelligible with Swedish and Norwegian.

The unified kingdom of Denmark emerged in the 10th century as a proficient seafaring nation in the struggle for control of the Baltic Sea. 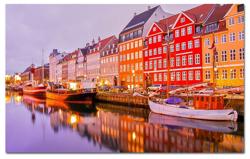 The Constitution of Denmark was signed on 5 June 1849, ending the absolute monarchy which had begun in 1660. It establishes a constitutional monarchy—the current monarch is Queen Margrethe II—organized as a parliamentary democracy. The government and national parliament are seated in Copenhagen, the nation's capital, largest city and main commercial centre. Denmark became a member of the European Union in 1973, maintaining certain opt-outs; it retains its own currency, the krone. It is among the founding members of NATO, the Nordic Council, the OECD, OSCE, and the United Nations.

Danes enjoy a high standard of living and the country ranks highly in numerous comparisons of national performance, including education, health care, protection of civil liberties, democratic governance, prosperity and human development.  Denmark is frequently ranked as the happiest country in the world in cross-national studies of happiness.  The country ranks as having the world's highest social mobility, a high level of income equality, has one of the world's highest per capita incomes, and has one of the world's highest personal income tax rates.  A large majority of Danes are members of the National Church, though the Constitution guarantees freedom of religion.

Where is Esbjerg, Denmark?
Esbjerg is located on the West Coast of Denmark, 185 miles west of Denmark's capital city of Copenhagen and 185 miles north of Hamburg, Germany. 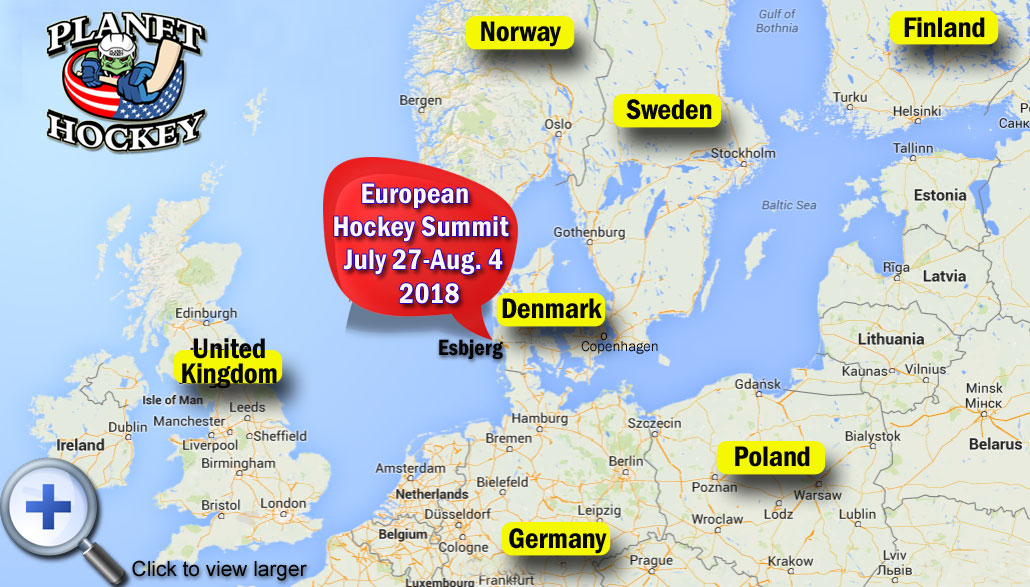 Egeskov Castle (about 1.5 hrs from Esbjerg), was completed in 1554.  In those days, political unrest, the Reformation and the Counts' Feud caused many landowners to build their houses as well-protected castles, and Frands Brockenhuus was no exception. He built his castle in the middle of a lake on a foundation of oak pilings, according to legend, in such quantities that "it took an oak forest to do it".

The building, which looks so peaceful and idyllic to today's visitors was built for defense purposes. It consists of two long houses connected by a thick double wall - the first house could be abandoned and the fight continued from the second house. The double wall is so thick, it contains hidden stairs and a well to secure a water supply during a siege. The outer walls have machicolations for dropping solids or liquids on the enemy and embrasures, and the enemy's flank could be shot at from the towers. In addition, the only access to the house was across the drawbridge.

Vor Frue Kirke (The Church of Our Lady) - From Absalon to the English Bombardment of Copenhagen when Bishop Absalon organized the building of a royal castle in the fishing village of Havn, and the hamlet was designated to fulfill a central role in the kingdom of Denmark, a small church had already been built there (the remains have been discovered under Strøget, close to Rådhuspladsen, the Town Hall Square). But a larger church was required to match the new prominence of the town. A document written by Absalon in 1185 and sealed in 1187, acknowledges receipt of tithes for the building and decoration of the Church of Holy Mary. But the Church of Our Lady, built in limestone at the highest point in the town, was not ready to be consecrated till 1209.